Are you familiar with the mythology of the phoenix? A legendary bird born again in fire; a symbol of rebirth and renewal.

When we speak about acid attacks in Iran, a litany of names tragically comes to mind. They are mostly the names of women, who for one reason or another were targeted by angry men in their community: someone in their family, perhaps, or an acquaintance who satisfied their ire by hurling acid over these women, disfiguring their faces forever and robbing many of their eyesight.

One of these women, however, has been able to shift the balance back in her own favor. On that bitter day when she was attacked in Isfahan in 2014, Marzieh Ebrahimi was just 25 years old. When she glanced in the rear view mirror of her car to check her parking, she had no idea the change in direction her fortunes were about to take, just seconds away. 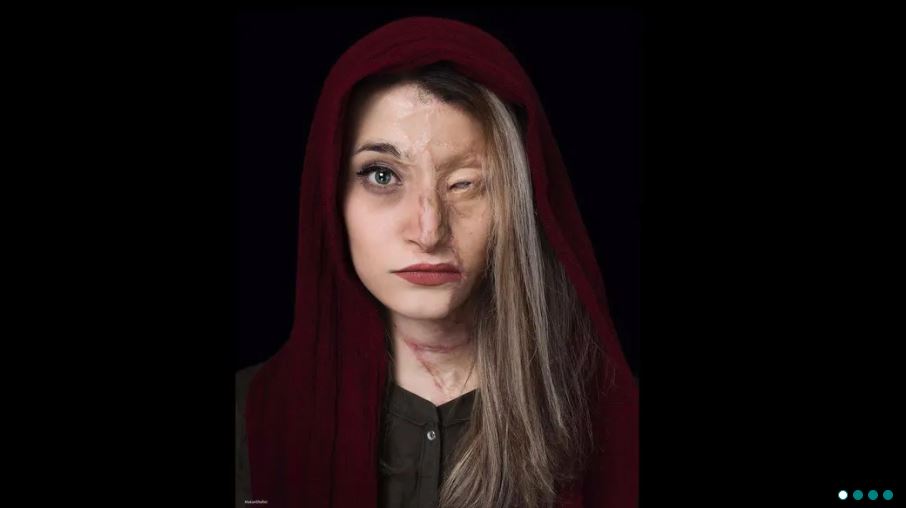 Speaking at an event at AmirKabir University years after the incident, Ebrahimi recalled: “I never saw them. I don’t know what they look like. I don’t know how old they are. I don’t know if they had a problem with me or with my hijab. But I do know one thing very well: I want to talk with them. I want to see them, and stare into their eyes, and ask them, ‘Why? Why an acid attack? Why me?’”

Despite the scars on her face and on her heart, Marzieh Ebrahimi is a beautiful woman who is also uncannily like a phoenix. Burned by the acid flung across her face, she was born again from the ashes and has now commenced a new life.

Six years ago, at least four women were targeted by acid attacks in Isfahan after Yousef Tabatabaei-Nejad, a representative of the Supreme Leader and Isfahan’s Friday Imam, made public remarks about women’s non-adherence to hijab at an event to mark Ashura. “Giving a warning [for non-compliance] is not enough anymore,” he said. “We should raise the stick and use force to combat bad hijab.” The lives of the women attacked in the aftermath were changed forever.

Marzieh Ebrahimi, for her part, comes from a big household. She was a tough girl who had experienced hardship in her life even before the acid attack. But she was also very preoccupied by her appearance: “My family was concerned with finding the attacker and worried about me regaining my health. But more than anything they were worried how I was going to handle this, considering how sensitive I was about my face and beauty.”

“Marzieh is only 25,” her brother told Etemad newspaper seven months after the incident. “She was a midwife in a hospital before all this happened. She had plans. Thank God, she is still motivated. But she is not the same; she is not living her life with the same passion and excitement as before.”

In the horrendous first few months after the incident, people close to Marzieh said she was traumatized. She kept the car window rolled all the way up even if it was very hot inside the vehicle, and the honk of motorcycle horns and the sound of exhaust pipes scared her. She did not want to pursue her case against the attacker herself, delegating it instead to her brother.

Gradually, however, Marzieh came back to life – and this time, it was not only for herself. While Marzieh was far from the first woman to be viciously targeted by an acid attacker in Iran, and would not be the last, she decided to take a stand and make a difference. “There was a moment when I realized it wasn’t the acid that was burning my face,” she would later recall. “It was a heap of pains all piled together: a pain that wasn’t a whine or a wail anymore, but was turning into a loud cry.”

Marzieh Ebrahimi became the simultaneous voice of many men and women. She became a symbol for standing up to acid attacks, having decided that rather than being a victim and isolating herself from society, she would represent survivors. 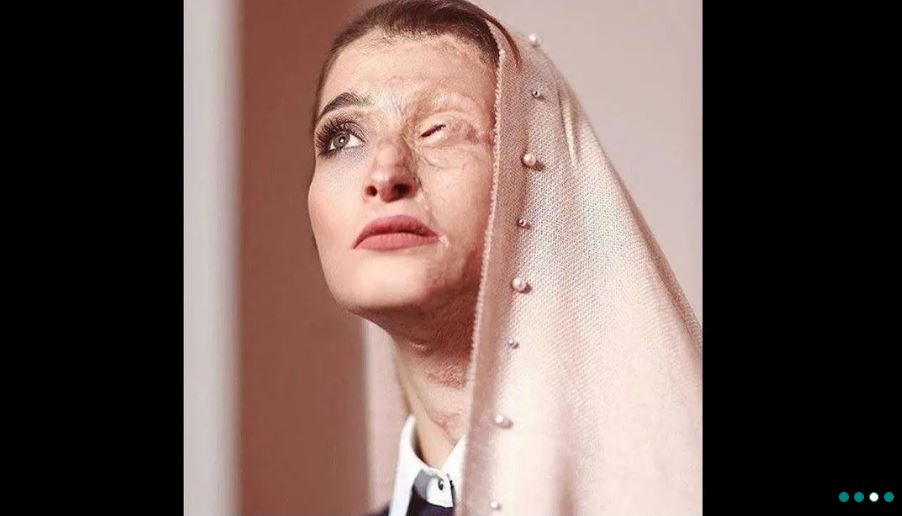 Standing Up for Victims of Acid Attacks in Iran

Last year, as she was turning 29, Marzieh took part in a photoshoot with a young photographer named Negar Masoudi. The resultant images were displayed in an exhibition at the Iranian Artists Forum in Tehran. Two of the pictures in particular grabbed visitors’ attention and were widely shared online. The first features Marzieh’s half burned-face in front of a black background, and in it she is wearing a crimson scarf. The second depicts Marzieh in a white wedding dress: an arresting image that conveys hope for a better future and the passion for life that resides in the hearts of both Marzieh and her husband.

For Marzieh Ebrahimi, the sole motive for taking part in this exhibition was to see limitations or an outright ban imposed on the buying and selling of acid in Iran. “I spoke out because I didn’t want to remain a victim,” she says. “I wanted to fight back. This was the main reasoning that gave shape to the idea of collaborating with Negar Masoudi.”

Since then, she has focused her efforts toward getting new restrictions approved. “We have been working hard to convince our representatives of the need for such legislation,” she has said. “No one thinks about this momentary rage and fury, [or how it] could take away lives. When we are angry, we might throw things at each other… But acid leaves its imprint on one’s body forever. In an angry society, there should be limits on the purchasing and resale of these substances.”

In May 2019, Marzieh Ebrahimi and three other acid attack victims went to the Iranian parliament and spoke with MPs about the paramount nature of their request. During the visit Ebrahimi told them: “On behalf of four victims from Isfahan, I inform you that so far we haven’t received a response [about our attackers] and there has been no atonement. It has been 5 years since the incident. I am not here to complain, but to ask for your support in increasing the punishment for this crime and decreasing the likelihood of acid attacks.”

At the meeting the MP Zahra Saeedi-Mobarakeh, who represents Mobarakeh County in  Isfahan, tried to be funny, joking with Marzieh: “You got away good. You only lost half of your face. What happened to the attacker?”

Marzieh was surprised to learn that Saeedi-Mobarakeh was an elected representative for Isfahan. “I’m so sorry to hear you’re MP for Isfahan,” she responded, “but you don’t even know the acid attackers weren’t identified.”

Despite all the pain and suffering her injuries caused her, Marzieh Ebrahimi has said she refuses to fight fire with fire. “I don’t want qisas (retribution) or execution,” she has said. “I want the attacker to be put in jail for life. Violence should not be answered with more violence. These people are more afraid of imprisonment.”

Marzieh asserts that her husband’s decision not to leave her after the attack was humane and logical, not borne out of pity. She no longer has any hope of finding the attackers and no longer attends court. Life goes on for Marzieh Ebrahimi. She continues her treatment and often visits others like her who have partially lost their faces.

But last month she was forced to speak out again on the issue. Isfahan’s Friday Imam, undeterred by the atrocities of 2014, made further incendiary comments on veiling on October 2. At a meeting with with the Intelligence and Security deputy of the armed forces of Isfahan province, Yousef Tabatabaei-Nejad declared: “Society should be made to be insecure for women who unveil. They should not be allowed to break the norms so easily on the streets.”

Together with another acid attack victim, Soheila Jorkesh, Marzieh reacted angrily to the comments alongside dozens of other social media users. What Tabatabaei-Nejad had said was a knife to the tired bodies and souls of victims, reminding them that the perpetrators of these terrible crimes were still at large – and there was still no will to catch them.

“In those days [2014],” Marzieh wrote on her Instagram page, “fear had taken over the whole city. Fear of going out, fear of the streets. That’s all they wanted. And it is happening again.

In rising phoenix-like from the ashes of a dreadful crime, in speaking out about what happened to her and supporting other survivors of acid attacks, Marzieh Ebrahimi remains an inspiration for Iranian women and victims of violence the world over.