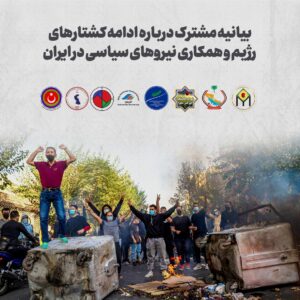 forms, the so-called Islamic regime continues to killings. The regime, which is drowned in internal and external crises and has lost its legitimacy, executed two more protesters on the third anniversary of the downing of the Ukrainian plane. Of course, it has executed a number of protestors before and dozens of others have been sentenced to death. These executions, which lack all basic le

gal criteria and are carried out solely on the basis of confessions under torture, have wounded the conscience of the entire free world, and the whole world considers these sentences to be state murders, not fare punishment.

🔸Naturally, it is not possible for the citizens of Iran and the world to remain silent against these murders, and the regime has and will face the consequences of these murders both on the street and in the political environment. It is very important that the free world does not remain silent about the ongoing crimes in Iran, and an appropriate and deterrent respons

e to the Iranian regime has become inevitable.
While the Iranian regime has entered the no-return path to the abyss of collapse, naturally the forces opposing the regime have increased their activities and the effort to create an alternative to the regime has accelerated; But unfortunately, once again, we see that reactionary and totalitarian currents have entered the field and are trying to dominate the revolution by abusing the rents they have. Unfortunately, these currents try to return to the era of Reza Khan’s fascism by ignoring the pluralistic structure of the country and all the differences and with a limited understanding of the field and historical facts. It should be known that the monopolistic, fascist and totalitarian currents that do not learn from the bitter experiences of history and are trying to lead the revolution astray and prepare for the re-establishment of dictatorship, do not have the support of the oppressed and struggling nations.

🔸Everyone agrees on the fact that this corrupt and deadly regime should be overthrown, but ignoring the field realities of multinational structure of country and promoting and applying historically failed formulas that always try to restore the authority of the monolingual state-nation, the overthrowing of regime will be hindered. If today the streets of Ahwaz and Azerbaijan are silent, it is the result of insisting on this approach by reactionary currents. It is now clear to everyone that the overthrow and revolution is only possible with the active participation of all nations in Iran.
We, as the signatory organizations of this statement, inform the public opinion and the conscience of the free world, that whatever alternative is created to overthrow the fascist and reactionary regime of Iran, regardless of national, religious, political and social plurality; Especially the fact that Iran is a multi-nationality will be a failure and a dead baby from the beginning. No progress will be achieved without recognizing the elimination of all discrimination, including national, religious, economic, political, and sexual discrimination, and recognizing the right to self-determination of oppressed nations.

🔸The union of the democratic forces of the oppressed nations with the field forces is the way to overcome the religious tyranny and neutralize any regression to the past.

U.K. Says Russia To Give Iran Military Components In Exchange For Drones